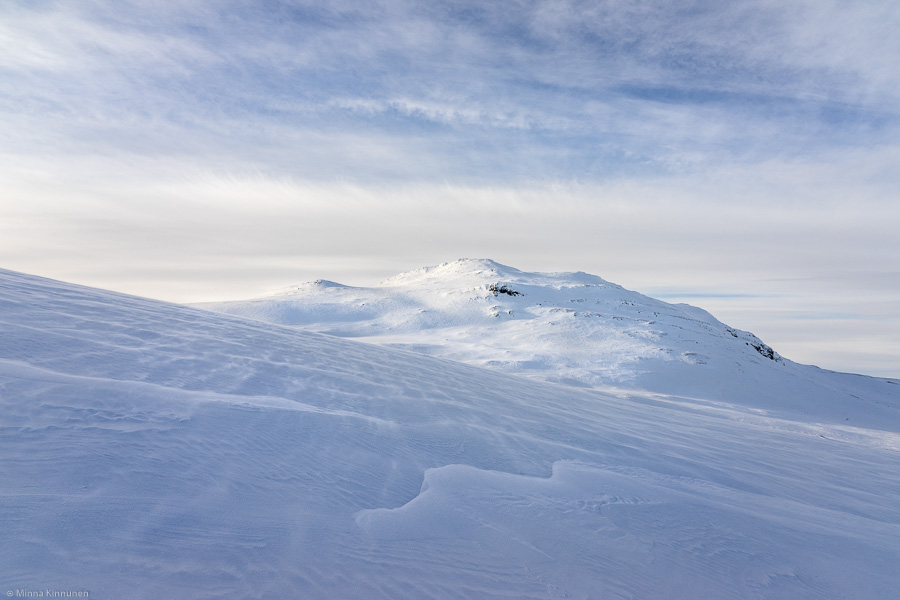 Another thing I’ve been meaning to do for years is to take the path from the north-eastern corner of the Anåfjället nordic ski trail and then ski around Gråstöten. And today I finally did that, I just really wanted to take a good look at Blåstöten which is mostly hidden when you view Anåfjället from the south or west.

The morning wasn’t exactly inviting me to go out because it was -32 degrees again, but as usual, by lunchtime it was only a few degrees minus and the sun was shining through some thin clouds (hard winds and snowfall forecast for tomorrow). Going up the big hill was sweaty work, even after I took off my jacket and gloves.

I glued the skins on the skis when I finally reached the corner where the trail branches. I know I cursed the snowmobiles yesterday, but my take is, if the snowmobile tracks are available, then use them. And there were tracks here, which helped me get above the forest line surprisingly quickly. It’s less than 1 km actually and the skins made it easy work. I stopped for fika while I still had the sun, but I didn’t sit around and enjoy it. I still had a long way to go!

When I turned towards north to get around Gråstöten, I finally got a view of Blåstöten. It’s not much of a looker, to be honest, but it has a special place in my heart after all those years in Messlingen, where Blåstöten was the dominant mountain in the south.

Now the wind also picked up, and as I started ascending towards the pass between Gråstöten and Ånnfjället, I had the wind right on my face. It was getting a bit tough and for a brief moment I got a bit worried when my legs started feeling shaky after three hours of pretty much nothing else but uphill. The snow didn’t carry me, I sank maybe 10 cm and the skis were slipping (I had taken off the skins when I reached the plateau on the east side), so the head wind was really not what I needed. I didn’t have far to get to the highest point, but I stopped to put the skins back on anyway and that was two minutes well invested. I still sank in the snow and the wind was still there, but I didn’t need to waste any more energy on sliding backwards so the remaining ascent was easy.

The sun was almost completely behind clouds when I started gliding down towards the nordic ski trail extension in the west. I just put on my warm mittens so my fingers wouldn’t freeze on the way down, which is often the case when coming home from Anåfjället. Speaking of clothes, it turned out that I wasn’t at all overdressed. It was just right!

Funny thing about the wind though – there was none any more. I’m sure there’s a good explanation why the wind was so local on the eastern slope… but that has to wait for another day. 22 km, 5 hours, 555 m ascent (highest point almost 1100 m). Time to get some sleep now!

This website uses cookies to improve your experience while you navigate through the website. Out of these, the cookies that are categorized as necessary are stored on your browser as they are essential for the working of basic functionalities of the website. We also use third-party cookies that help us analyze and understand how you use this website. These cookies will be stored in your browser only with your consent. You also have the option to opt-out of these cookies. But opting out of some of these cookies may affect your browsing experience.
Necessary Alltid aktiverad
Necessary cookies are absolutely essential for the website to function properly. This category only includes cookies that ensures basic functionalities and security features of the website. These cookies do not store any personal information.
Non-necessary
Any cookies that may not be particularly necessary for the website to function and is used specifically to collect user personal data via analytics, ads, other embedded contents are termed as non-necessary cookies. It is mandatory to procure user consent prior to running these cookies on your website.
SPARA OCH ACCEPTERA